We had a lot of Danish visitors this summer – volunteers for the Youth Center who wanted to stop by Titagya. One of my favorite memories of the summer was thanks to a bag of balloons that one such visitor brought for the kids. I don’t know if the kids had ever seen balloons before, but they were a huge hit. It was a Friday, so class only lasted from 8-9 a.m. and the students got to play outside until noon. The hype and excitement over the balloons lasted them at least a good half hour (which in kid time seems like an eternity). They even abandoned their precious soccer balls to chase around the balloons! 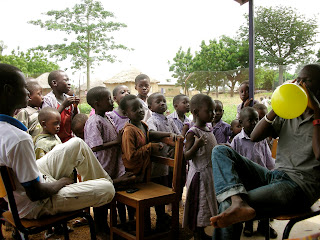 Due to the wind, most of the balloons ended up flying over the fence surrounding the school, so it would be a mad rush to see who could get to them first. A lot of other women and children walking by thus stopped and watched the whole balloon commotion. I’m sure it was quite a sight for everyone! 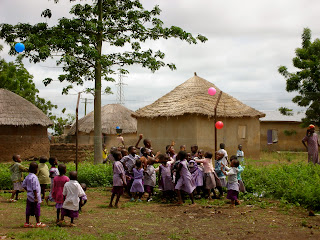 Granted, a lot of the balloons popped pretty quickly since it is mostly dirt outside the classrooms, but it was so funny to hear the shrieks of happiness every time a balloon popped. I thought the younger students especially might be a bit frightened at the loud noise, but their faces only expressed the purest glee you could possibly imagine. It was truly amazing to witness how just a simple balloon could bring so much joy, laughter, and smiles to young children. 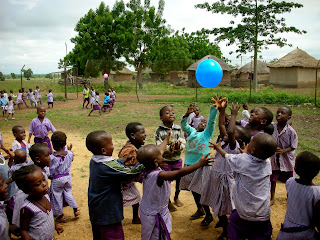